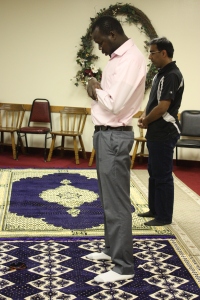 I haven’t been great about cataloguing my stories so far (I’ve cut most of my articles out of the paper and stuffed them into a plastic envelope thing — real old-fashioned clips!), but I wanted to share this one.

Ramadan started over the weekend, and I used it as a “news peg” for a story about the small Muslim community in Dickinson. I’m not in love with the way my piece turned out — I could have done better, and jeez, that schmaltzy ending — but I love that I got to write it (if only because it was a chance to introduce one of the country’s most WASPy regions to a touch of Islam and a few words of Arabic).

I was expecting to have to work a lot harder to gain access to the community and their prayer service — they would have every right to be remain cautious of a stranger intruding on such a private, personal act, particularly one from the media. And in a town that’s not exactly friendly to ‘outsiders,’ I could understand if they would prefer to stay a little anonymous. Instead, the group was welcoming, eager to talk, eager to share their stories. The imam put in a good word for me, asked that people help out however they could; I had a line of people waiting to speak with me after the prayer service, even if they didn’t know quite who I was or why I was there.

As a mistrusting, often-angry misanthrope, I am always amazed by how open, warm and generous people can be with their time and themselves. Even if the story isn’t a work of art, it’s been one of my favorites from my time here so far to report and be a part of.

This post is already veering into TLDR territory, but the full story is below. You can also read as a PDF here (Forum News Service ‘archives’ all of its stories after five days–which is just bad business sense, in my opinion).

This weekend Muslims around the world, and in North Dakota, will observe the beginning of Ramadan, the Islamic holy month of fasting and reflection.

Every day through July, from sunup to sundown, they will abstain from eating and drinking.

The fast is a way for Muslims to attain piety, strengthen their relationship to Allah — the Arabic word for God — and feel empathy for those less fortunate than them, explained Dr. Ibrahim Ahmed, a pediatrician who serves as the imam, or religious leader, for the Dickinson area’s Muslims.

The U.S. Census doesn’t track religious affiliation, so there are no exact numbers on just how many Muslims live in the state, let alone Dickinson. It’s not a state unfamiliar with Islam; one of the first, if not the first, mosque in the U.S. was built in Ross.

According to a Pew Research poll, less than 1 percent of the population in the Dakotas identified themselves as Muslim. For Dickinson’s small Muslim community, Ramadan is as much a time to grow closer to God as it is to each other.

A place to pray

Just a few months ago, Dr. Muhammad Jamil thought he was one of just three Muslims in Dickinson.

The internal medicine specialist, along with Ahmed, his colleague at St. Joseph’s Medical Clinic, and one other friend, would use Ahmed’s cramped office for daily prayers at work.

“The main thing in Islam, you should pray together,” Jamil said.

He used to travel the 90 miles to Bismarck every Friday to attend special prayer services at the chapel at St. Alexius Medical Center. It had to make do; the closest mosque is in Fargo.

Slowly, though, Jamil, Ahmed and their friend, Sadi Haque, began meeting other Muslims in the area, ones who, like them, had been praying in small groups, unaware of each other.

“Every day, people hear about us,” Ahmed said. He met new members at Walmart, and Muslims started coming from as far away as Williston and Killdeer to pray.

A group began meeting in Ahmed’s basement for Friday prayers. Haque posted a listing on IslamicFinder.com, inviting others to join.

Since December, Dickinson’s Muslim community has been filling the Armstrong Room in the basement of the Elks Lodge every Friday afternoon to pray, facing the holy city of Mecca, surrounded by dried flower wreaths and paintings of the prairie — not things you would likely find in the mosques in Egypt, Ahmed’s native country, or Pakistan, where Jamil is from.

Others come from Sudan, Ethiopia, Senegal, Bangladesh, the U.S., usually for work.

“Two months ago I heard of the prayer services,” said Mamadou Toure, a native of Senegal who came to Dickinson seven months ago from Missouri, where he taught at a Quranic school.

Before he met Ahmed and Jamil, he said, “I prayed alone.”

A first for many

For many of the community’s members, this will be their first Ramadan in Dickinson.

A lack of understanding among non-Muslims about what the month signifies, or awareness of what it even is, makes fasting difficult.

“It’s very, very hard,” Ahmed said. “No one else is observing or understanding that you’re fasting. Sometimes we have to put extra effort to please God.”

Seydina Sylla, another native of Senegal who initially came to the city in 2011 for work, spent last Ramadan in Atlanta, a city with a sizeable Muslim population where he was able to take time off of work to accommodate his fasting schedule.

Sylla said he is asked all the time why he isn’t eating or drinking; his part-time job at Applebee’s makes fasting especially hard.

Sylla said he focuses instead on the fasting itself, and what it means to him: it’s “food of your soul,” he said.

“A lot of people don’t know what is hunger,” he said. “If you’re Muslim, rich or poor, you fast anyway. In worship of Allah, you have to do it.”

Ahmed said he hopes one day that Dickinson Muslims will have a place of their own where they can worship Allah: a masjid, or mosque, in a storefront somewhere.

The Elks Lodge has been very welcoming of the prayer service, Ahmed said, but the group has been outgrowing the Armstrong Room.

The group will have to hold iftar, the special meal to break the fast, at a member’s house; Jamil said they’re considering going all the way to Bismarck to celebrate Eid, the end of Ramadan, in July, but he hopes there are enough people here that they can have a celebration in Dickinson.

It’s less important where they pray, though. What matters is that they do it together.