One of my first formal decrees as the paper’s first “Multimedia Editor” was to start a weekly online-only feature called “ICYMI.” It is an acronym I made up completely by myself that stands for “In Case You Missed It.” I am thinking of having it copyrighted.

It’s more or less what it sounds like: Every Sunday night I gather up the last week’s biggest stories–whether “biggest” means most Facebook likes or comments, longest-trending on our site, or just most important (e.g. not a lot of people here went nuts over Ted Cruz’s announcement that he’s running for president in 2016, but it was still a big national conversation for a couple of days).

The feature has been an easy way to give a tiny jolt (usually short-lived, just a day or so) of new life to a slightly aged story, and to repackage some old material to put on the site during our generally slow Monday mornings (our paper doesn’t publish Mondays). It’s by no means original–except for the acronym, which I most certainly invented–but so far I think it’s been a good addition to our site and a good driver of some (new? more?) traffic to some of our best stories.

“What’s interesting about all this is that the movie itself was called The Love Letter. And in the movie, one person after another picks up this anonymous letter and each person thinks that it’s meant for them. And then, each person in the movie starts eyeing people, seeing them in this whole new light as they wonder, is this the person who sent me the letter?

The point is, I guess, the letter, through its sheer vagueness, can mean what anyone wants it to mean. That is, as long as the meaning involves love and them.” (“This American Life,” ep. 288)

I’ve wondered about this unsigned post card that came for me at work since September, when it landed on my desk with nary a hint as to who sent it. Is it from a pining former paramour, as the romantic part of my brain hopes it is? An incarcerated felon who for whatever reason subscribes to The Dickinson Press, as my more suspicious reasoning suspects? Or some psychological ploy to trick me into coming down to Key West, Fla.? Probably that.

By the time I finish up writing this, I’ll likely be four days late on my annual year-end retrospective/hopeful year-ahead promises. It took me a while to feel motivated enough, quiet enough, settled enough to sit down and write, something I haven’t done in at least a couple of months. So much for last year’s resolution to write every day. (Though technically, as a reporter, I have kept up this commitment, but not in the way I meant to or thought I would. Semantics.)

It’s fitting somehow that I’m only just now looking back on 2014. For the first time in a long time, the old year bled into the new one. It used to be I took a break for the holidays and came back to new classes, new interns, a new city, a new sublet. This past holiday I met my family in Seattle for a week and came back to the same people, the same job, the same city. I guess I really am an Adult.

Most any way you slice it, 2014 was not a great year. Globally we had the outbreak of the ebola virus, terrible violence against journalists and aid workers in the Middle East, the spread of ISIS, three (three!!!) major plan crashes/disappearances, major unrest between Russia and Ukraine. Stateside we lost count of how many unarmed Black men and women were killed, either by other (white) citizens or by the police. I can’t name a single person who would want to do it over.

2014 was not a banner year for one Ms. Nadya Faulx, for reasons professional and personal.  Despite my hopes and feeble attempts to make NPR keep me in their warm embrace of free coffee forever and ever, I moved across the country from D.C. to North Dakota in April to take a job with a small paper, a move that took me away from friends and familiarity that, now especially, I’m almost desperate for. It’s been a more difficult adjustment than I’d expected.

But from that hectic, simmering pool of bile and used hypodermic needles that was 2014 came nuggets of inarguable good. If the past few years have taught me anything, it’s that by some universal will, I always end up where I need to be when I need to be there, and I think 2014 was no different.

Life in D.C. was great–no need to “silver lining” that one. Yes, rose-tinted glasses, nostalgia, etc., etc., but really, I was building a decent life there. Sure, I could have done without the moving-every-four-months pattern I found myself in as an intern with little to no stability or sure bets for the future, but I loved working with the Diversity Office at NPR and getting to be a part of that environment. I was close to Brandon; I had friends in the city. If I could have stayed, I would have in a heartbeat. I left behind a lot there.

Everything after D.C.–that’s where I need to remember to focus on the positive things:

1. Moving meant renting a car, playing whatever the hell music I wanted, and enjoying a solo road trip.

2. The drive from Houston to Dickinson meant three days to hang out with my dad.

3. I came to Dickinson because I got a job, a real JOB, with hours and benefits and some kind of permanency; whenever I get down on myself for failed job interviews or unanswered cover letters, I’ll remind myself that I did at one point get a real job on my own merit, that some employer wanted me, and that I can do it again. (More importantly, I got a job doing what I wanted to do–in a roundabout way.)

Chasing a tornado in Watford City–as reporters do

4. I live alone again and it’s glorious, more glorious than I remembered. My bathroom is disgusting. There are dishes in the sink. My kitchen is a mess because I spontaneously painted a wall red and now have to peel it all off. But there are no roommates to appease by changing any of it. (I know; I’m so American in this respect that it hurts. So, I like my own space.)

5. I got a cat! Let it be known, on record, that I am not a cat person. Cats, on many levels, scare me. But Dragon (nee Lucille, as he was known when I first took him home from the pound and thought he was a female) is the Merlin I always wanted: affectionate, needy, almost endlessly accepting of my overwhelming amounts of love. 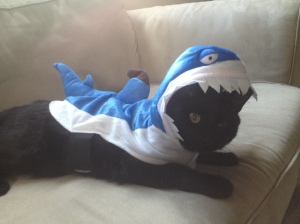 Dragon loves me shark-costume much.

6. I got a dude. We met at a rodeo; he is a former rodeo clown. Only in North Dakota.

7. I proved to myself that I can still take some scary chances and land on my feet (with lots of help from my parents and sister, who have kind-of-patiently listened to me fret and whine and bitch throughout).

Not a bad place at all, really

I rang in 2012 in Denver, 2013 in Chicago, 2014 in D.C. and 2015 in North Dakota; I’d be stupid to try to guess where I’ll be a little under a year from now. My hopes, like anyone else’s, for the next 12 months are that they are better than the last 12. That we all learned something from 2014 that will make us just a hint more wizened in 2015. I know for myself that means talking to my family more, challenging myself at work, doing things even if they scare me or stress me out (which is everything, so…keep at it!), saying yes AND no more often (to different things) without second-guessing my gut about them, and taking much better care of myself so I can be a better person to everyone around me.

Also, travel. But that’s my resolution every year.

I took these photos almost two months ago for a story on a group of artists’ efforts to beautify downtown Dickinson, a lovely few blocks of brick buildings and independent shops that unfortunately have gone without a sprucing up for many decades.

“My past is littered with the bones of men who were foolish enough to think I was someone they could sleep on.”